Giardia is a group of protozoan parasites (identified by the letters A through H) that can infect people, as well as dogs and cats and lead to symptoms such as diarrhea and upset stomach. Today our South Charlotte vets share tips on how to tell if your cat may be infected with Giardia, and what you can do to help resolve symptoms and prevent family members and other pets from becoming infected.

Giardia duodenalis is a protozoan parasite that can infect many different mammals, including cats, dogs, and people. There are a number of different strains of Giardia that are categorized by letters from A - H. Cats are typically infected with assemblage F, whereas people are generally susceptible to assemblages A and B. That said, while rare, it is possible for cats to harbor strains A and B, potentially causing infection in their owners.

The condition is most often seen in kittens and cats that are suffering from poor health due to other underlying conditions.

Giardia can be challenging for pet parents to deal with since treatment isn't always effective and reinfection will often occur.

How is giardia spread?

Can you get giardia from your cat?

Giardia infections are common in people however drinking contaminated water is the most common way for people to catch giardia.

While it is possible for cats to harbor the A  strain of giardia (dogs can harbor the B strain) that people are susceptible to, the spread of giardiasis from cats to people is not very common.

Nonetheless, precautions, such as wearing gloves while changing cat litter, washing your hands well after handling your cat, and disinfecting items that come in contact with your cat is advised. (including the litter box, water bowls. bedding, toys etc.). People with compromised immune systems should be particularly diligent about disinfecting if their cat is diagnosed with giardia.

Disinfect surfaces that your cat comes in contact with using a solution of chlorine bleach at a dilution of 1:16 or 1:32.

What are the signs of giardia in cats?

Giardia parasites damage the cat's intestinal wall and typically lead to the sudden onset of foul smelling diarrhea. Not all cats infected with Giardia will show signs of infection, however if your cat has giardiasis you may also notice:

It is not uncommon for diarrhea related to giardiasis may be intermittent. Fevers are not typically associated with giardia infections in cats.

What is the treatment for cat giardia?

Fenbendazole and metronidazole are the most commonly prescribed treatments for giardia in cats.

In certain cases, the two medications can be given in combination to fight giardiasis.

Your vet may also prescribe a highly digestible diet until your cat's stool hardens. Prolonged bouts of vomiting and diarrhea can quickly result in dehydration so it's important to ensure that your cat remains well hydrated.

How long will my cat have giardia?

It generally takes between 3 to 5 days for the parasites to be cleared from the stool once antibiotic treatment begins, and 5 to 7 days for symptoms to resolve.

Note: The advice provided in this post is intended for informational purposes and does not constitute medical advice regarding pets. For an accurate diagnosis of your pet's condition, please make an appointment with your vet.

Is your cat experiencing the symptoms of giardia? Contact us today to book an appointment for your feline friend. Our vets are experienced in treating many parasitic conditions in pets. 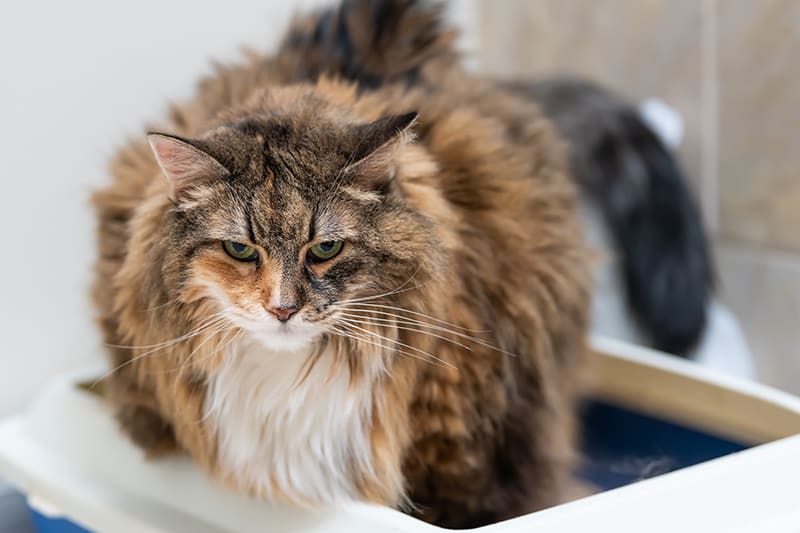 Looking for a vet in Charlotte?

I think my cat has a cold! What should I do?

If your feline fur baby is sneezing or has a runny nose there's a good chance they have a cat cold. In today's post, our South Charlotte vets explain more about cat colds and when it's time to head to the vet.

Rabies is a fatal virus that is highly contagious among cats and other pets. Our South Charlotte vets discuss the effects of the rabies virus on cats in this post, including how common it is, the symptoms it causes, and how it can be avoided.

Cat Health Tips - How often do you take a cat to the vet?

You want your beloved cat to live a long, healthy life, but what is the best way to help ensure your cat's long-term health? Whether your feline friend is a kitten or enjoying their senior years - here's what our South Charlotte vets recommend.

I think my cat has a cold! What should I do?

If your feline fur baby is sneezing or has a runny nose there's a good chance they have a cat cold. In today's post, our South Charlotte vets explain more about cat colds and when it's time to head to the vet.

How To Tell If Your Cat Wants Another Cat For Companionship

Cats often seem like aloof, solitary animals but they are actually very sociable creatures who thrive on building intimate ties with other animals. Below, our South Charlotte vets discuss getting a second cat as a companion for your first, and how to introduce them to each other.